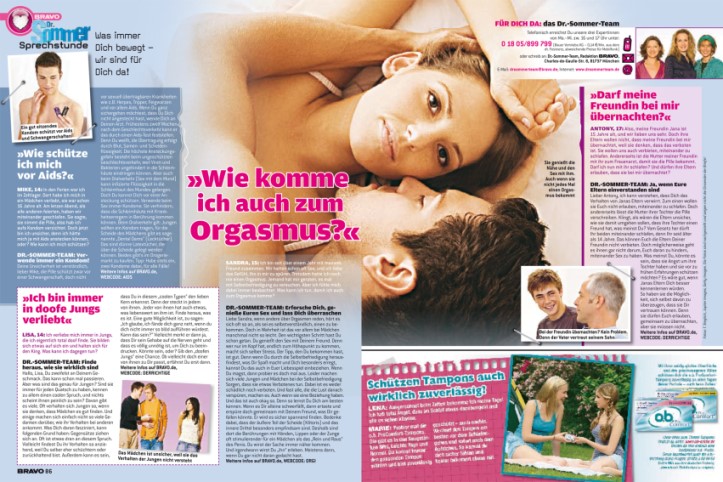 I grew up in a small town in the south west of Germany, in a huge apartment complex with a bunch of really tall apartment buildings. Out back there were a bunch of dumpsters and my best friend and I would search them every day because there was nothing else to do. There was also a playground near by, which was pretty much just a bunch of sand on the ground. We weren’t allowed to play there though because that’s where all of the heroin addicts were. There were a lot of dark corners to hide in, which meant there were syringes everywhere. So it was dumpster stuff, old strollers to play with, sticks to fight with, that was the cool shit for us.

There was a constant stream of new magazines, hundreds every month. Every day we would look in the dumpsters and every week or two there would be a new batch of them. This dude must have had a massive fetish. I always imagined the magazines came from an old pervy man who would be really angry if he found out I was stealing his magazines. I thought he had to put them there because he was embarrassed himself and didn’t want anyone to know he had them. I remember being afraid of this person; some kind of dangerous old porn man.

Eventually my friend and I became more jaded and exposed to genitals and hard-core sexual stuff. At the same time though, we were still really embarrassed about it. We weren’t able to talk to people about it or ask

During this time, my mom and I were living with my grandma and they both worked so no one was home a lot of the time. My school was also right across the street from our apartment, so sometimes my friend and I would skip school and go to my place. By then, the two of us had also already come up with a few schemes to make money from our classmates and the magazines were another great way to do that.

We would get twenty kids or so come over to my house during the two 45-minute breaks we had during school to look at the magazines.

I would stay up the night before looking through them all, picking out the best pictures in every magazine. I remember being really organized with post-its and everything. Then I would lay them out in a nice way and we would charge a cover for people to see the “peep show.” I would lay out all of these magazines organized really well and open to the best pages. We had to make groups at the end because there were so many people that wanted to come. We charged one Deutsch Mark or so, which was about the price of a set of either wresting cards or soccer cards.

My friend and I made a huge amount of money from this scheme but I was really stupid with how I spent it. In Germany we have Carnival in February, one or two weeks where you dress up and have guns and firecrackers. I spent all of my money on that stuff. My mom always asked me how I got a 160 Mark cowboy costume, and I just said I had saved up my money. I wasn’t getting money from anywhere else, I had no way of covering this, obviously I was lying.

One day, by the end of third or fourth grade, my mom came home early and all of the magazines were still laid out. I think I was looking at them and preparing my new show. She asked what I was doing and I panicked and pushed her out of the room, quickly put everything back in the Nintendo box, and ran downstairs running and crying “no no no no!” She tried to stop me but I ran past her and put all of the magazines in the dumpster. I just dumped the whole Nintendo box so when she went down there and opened the dumpster, she obviously found my box. She confronted me and said she knew what I dumped down there.

Eventually she said, “huh,” and shrugged her shoulders. I said, “huh,” and did the same. That was the whole conversation; nothing was ever said after that. I was still scared enough though that I stopped doing the peep shows and stopped collecting the magazines from the dumpster.